In 2007 I wrote a collection of ethnographic essays about a small peasant village in northern China. They made up a book I titled, Burning the Bank of Heaven. It was categorized in the extremely small niche genre of "ethnographic memoir." A niche it turns out to be extraordinarily difficult to publish in, for it doesn't fit cleanly into a more traditional genre of either ethnography or memoir. My experience with interested publishers was that they wanted me to either strip out the memoir part, which was important to me, or tone down the ethnography, which was the point of the book — to document these disappearing traditions, the customs and ways of life. Since I don't have an academic degree in ethnography or anthropology, my ethnographic contribution was often not taken seriously. In spite of receiving glowing compliments on the writing itself from all who read the manuscript, I couldn't find a publisher who wanted to publish MY book — if I took out one component or another, it would be *their* book. (I also got lines like these: "Beautiful writing, but I can't envision this as a movie.") It was an agonizing decision not to write and publish "their" book.

So instead I published over time a selection of the chapters as self-contained essays on my travel blog. At the end of the day, they've probably gotten more attention there than from some tiny publisher I might have finally found to agree to my book. Even better, I could include loads of photos which would not have been included in a printed book. I think the photos are a very valuable addition, and this inclusion helps soothe my disappointment in the print failure.

To read some of these chapter essays, please follow the link below to the collection I've published on my travel blog. This doesn't include all of the chapters from the book, but the majority of them, listed in no particular order. (Without the entire book's structure, I don't think order matters much.)

Additionally, I published some smaller self-contained excerpts in the section of my travel blog called Tuesday Tales. Here is the list of Tales from the village, if you'd like to read some smaller snippets.

Secrets in the Earth  Evading the destruction of the Cultural Revolution.

The Road to Jia Xian  Is it better for a traveler to have a tale or a smooth ride?

The Foreigners Are Washing Their Hands!  The town officials of a small Chinese village show us amazing hospitality as guests of their annual rain festival.

Mystery in the Riverbed  Creepy and intriguing ... how and why did this end up in the sand at my feet?

An Abandoned Past  An old man has a sudden burst of pride in his past home.

The Tree  A memorable incident that happened one morning while I was living in a traditional peasant village in China.

Revelation on a Rainy Day  My friend's family sacrificed so much for him, more than he even knew.

A Simple Joy  The smallest gifts provide such joy; whether it's more joyous for the receiver or for the giver is hard to say. 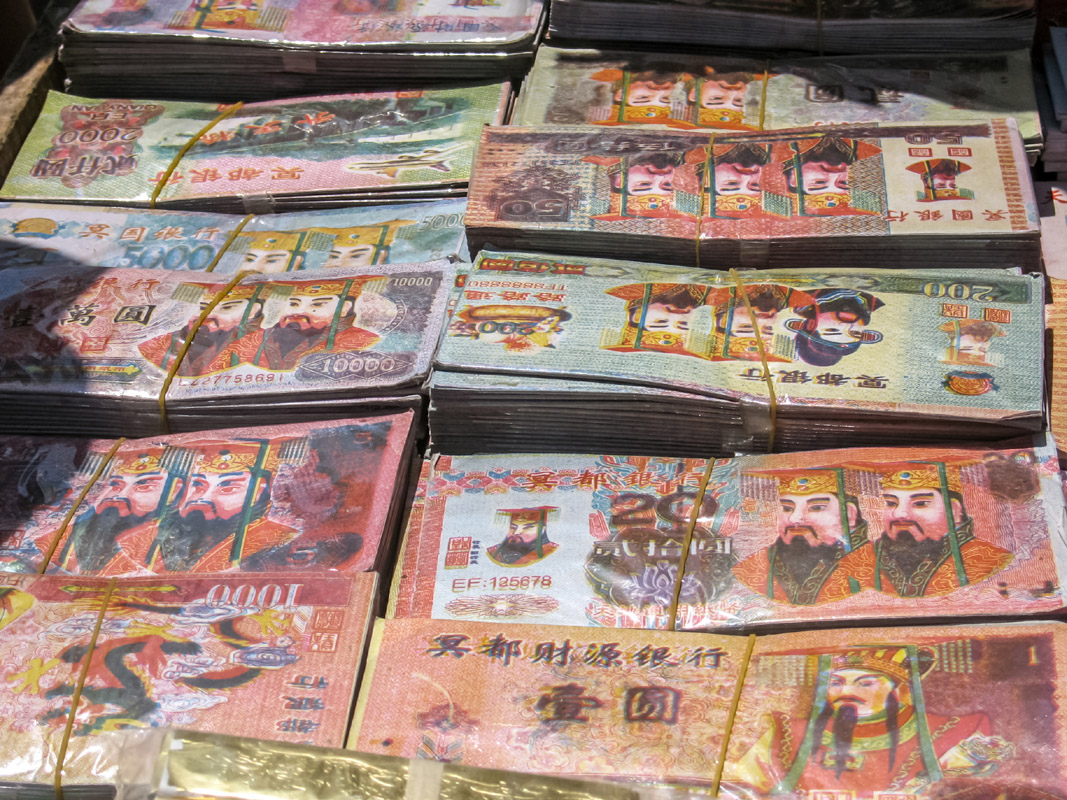 Above:  In traditional Chinese culture, people burn these bank notes from the Bank of Heaven at the gravesites of their ancestors to send them money in heaven.